As political tension escalated in Venezuela over the last few weeks, so did internet censorship.

It started off with edits to Wikipedia pages earlier this month, referencing the opposition leader, Juan Guaidó, as the President of Venezuela. This resulted in the blocking of Wikipedia. Then a group of Venezuelan soldiers circulated videos, announcing an uprising against the government of President Maduro and calling on the public to join them in the streets. This led to the temporary blocking of YouTube, Twitter and Instagram on the same day. During last week’s anti-government protests (where Juan Guaidó swore himself in as interim president), further network anomalies were reported. All cases were only observed on CANTV (AS8084), Venezuela’s state-owned and largest telecommunication service.

This report shares OONI data on recent censorship events amid the political crisis in Venezuela.

Local group Venezuela Inteligente reported on the blocking of all language editions of Wikipedia. According to their report, the Wikipedia blockage took place after some articles on Wikipedia made reference to opposition leader, Juan Guaidó, as the President of Bolivarian Republic of Venezuela. The block reportedly started on 12th January 2019 and was lifted by 18th January 2019.

The temporary blocking of wikipedia.org is corroborated by OONI data, illustrated below. 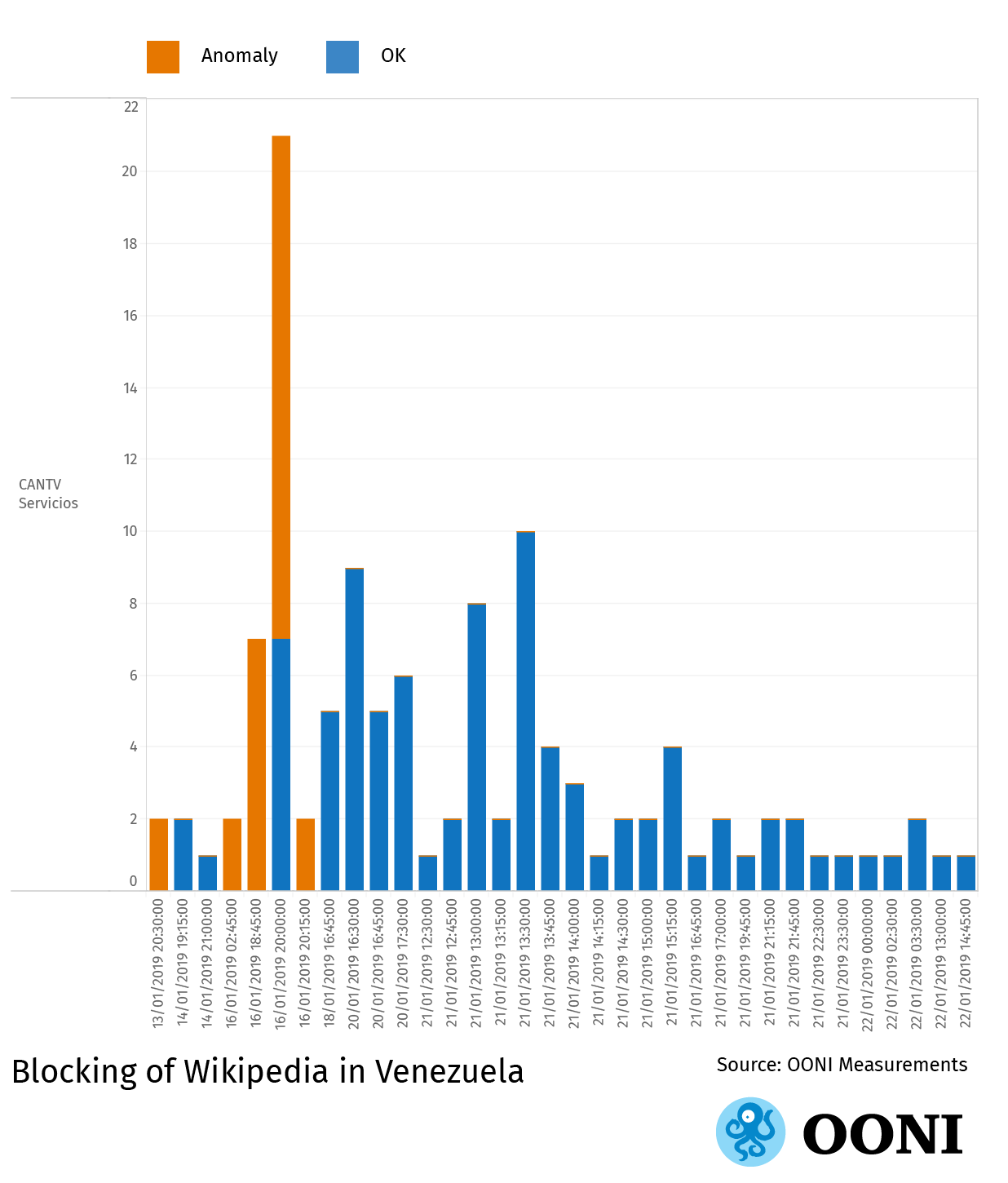 Note: In the above chart, the X axis is not continuous, but only displays measurements per 15-minute intervals when they exist.

Anomalous OONI measurements, involving the testing of wikipedia.org between 13th to 16th January 2019, present HTTP failures and timeout errors. The possibility of IP-based blocking is ruled out by the fact that OONI Probe tests successfully connected to the IPs of wikipedia.org, but HTTP(S) requests resulted in connection timeouts.

To investigate further, OONI and Venezuela Inteligente collaborated on some manual testing, using curl. We were able to validate the blocking by fingerprinting the TLS SNI field.

In the curl request below, we can see that the connection aborted after the first Client Hello message.

When attempting to do the same TLS handshake towards a different, unfiltered, host (www.kernel.org), we noticed the same behavior, illustrated below.

Conversely, when attempting to do a TLS handshake for the www.kernel.org domain and connecting to www.wikipedia.org, we received (as expected) a certificate validation error.

This means that (irrespective of the destination host) if the Client Hello message includes the SNI field with the hostname of “wikipedia.org”, the connection is not going to be successful. We therefore reached the conclusion that CANTV blocked Wikipedia by means of SNI filtering.

By using the Encrypted SNI (ESNI) feature of Firefox Nightly, we were able to successfully connect to wikipedia.org, further confirming the hypothesis that filtering occurred at the SNI field. This highlights the importance of the ESNI feature. If integrated into more browsers, more users could potentially circumvent some forms of internet censorship, without having to install circumvention tools.

It’s worth adding that, through OONI measurements, we observe connections to wikipedia.org failing on both HTTP and HTTPS, as the initial HTTP requests (prior to the 302 redirect to HTTPS) are also being interfered with, leading to connection timeouts. Since we notice timeouts on the HTTP (plaintext) request too, it’s likely the case that CANTV blocked wikipedia.org by means of SNI filtering and HTTP blocking as well.

Our hypothesis is that CANTV may have a filtering rule which looks for the substring “wikipedia.org” and closes the connection on the server-side. This could explain why we see the blocking affecting both SNI and host header fields. It may also be the case that CANTV’s blocking equipment includes host header field and SNI field support. We are currently unable to test and confirm these hypotheses, since the blocking of wikipedia.org has been lifted.

The block was presumably motivated by the circulation of videos showing members of the Bolivarian National Guard of Venezuela chanting anti-government slogans and showing solidarity with the opposition. Venezuela Inteligente reported that the blocks only lasted for a few hours and ended on the same day, by 9:50 am (GMT-4) local-time. 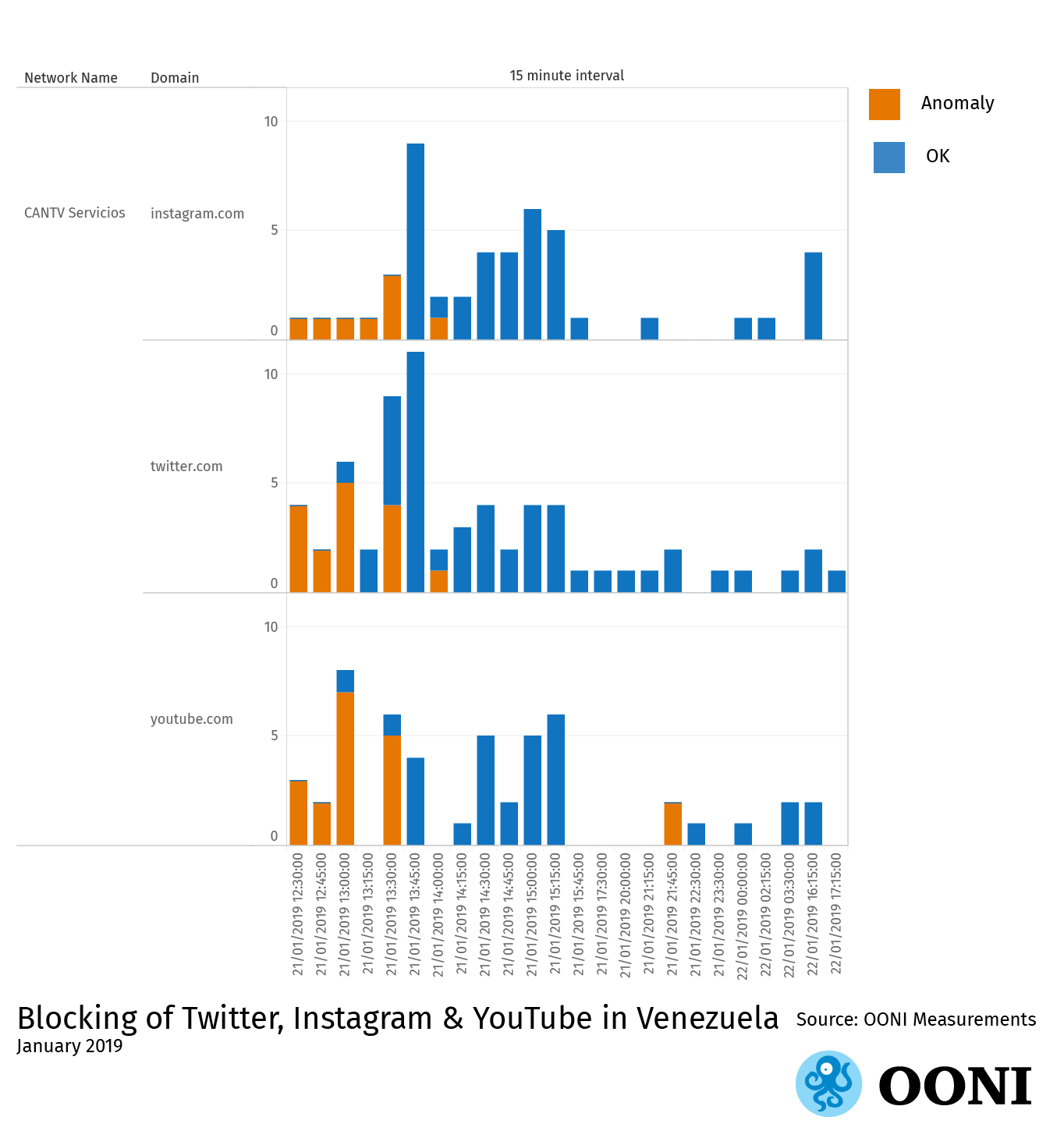 Note: In the above chart, the X axis is not continuous, but only displays measurements per 15-minute intervals when they exist.

The above graph (based on openly available OONI data) corroborates Venezuela Inteligente’s reporting, showing that access to youtube.com, twitter.com and instagram.com was temporarily blocked on 21st January 2019 for about two hours (mainly between 12pm UTC to 2pm UTC).

While access to these social media sites has since been restored, Venezuela Inteligente reported that Instagram was temporarily blocked again on Friday, 25th January 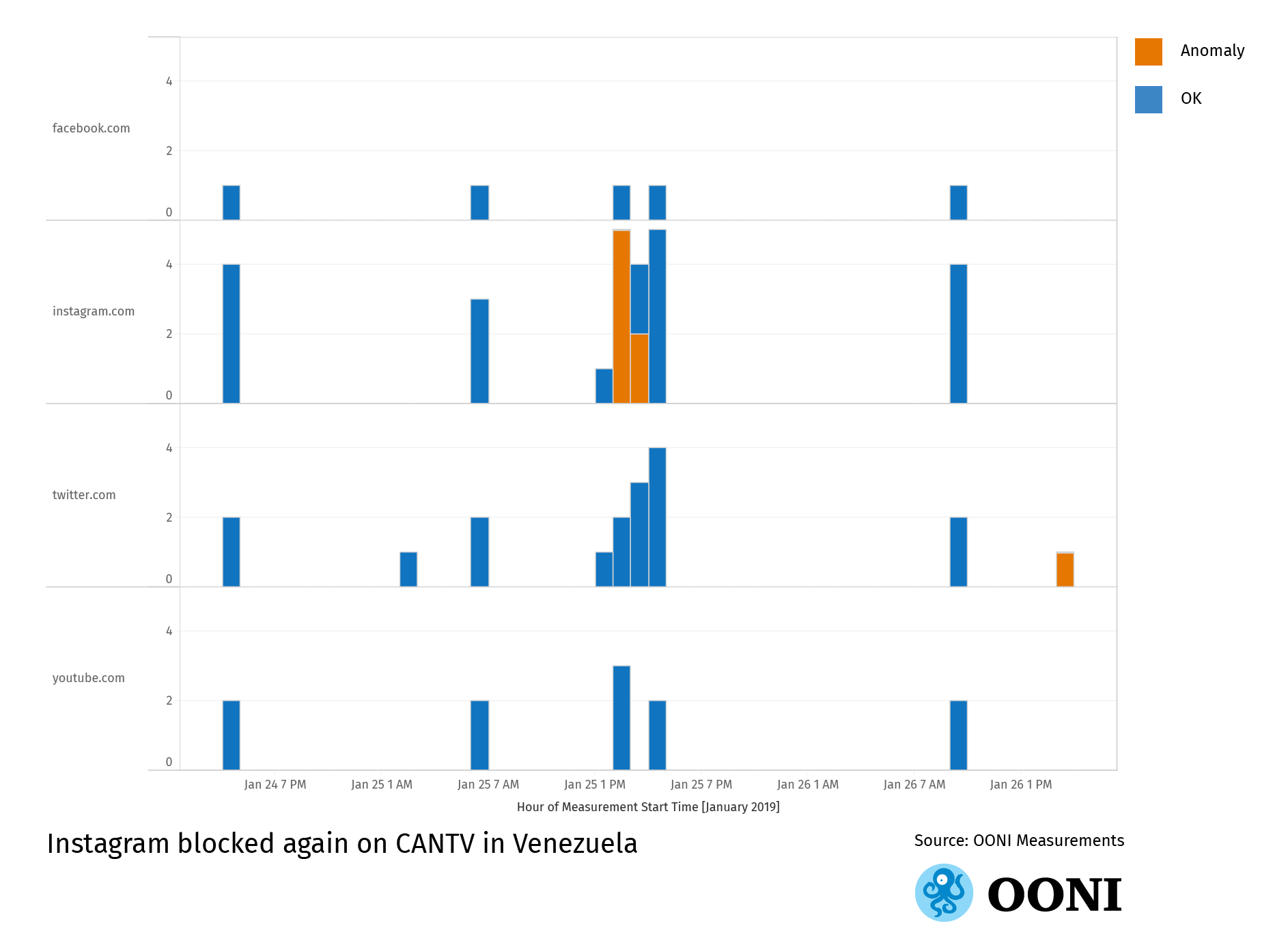 The above graph shows that all OONI measurements testing instagram.com between 2pm UTC to 3:30pm UTC presented HTTP failures (likely due to SNI filtering), suggesting that the site was temporarily blocked by CANTV. The testing of twitter.com also presented some anomalies on 26th January 2019, but the limited volume of measurements limits our ability to confirm potential blocking. Facebook and YouTube, on the other hand, have not shown any signs of network interference over the last few days.

We also manually confirmed these results, using the same curl based approach used for testing wikipedia.org, showing that they are using the same SNI-based technique to implement the block.

Venezuela Inteligente argue that Instagram live streams (among other services that include streaming) have become a popular source of live news in Venezuela during the crisis, used by independent news organizations and by public figures for their announcements. Venezuela Inteligente also reported that Instagram, Youtube, Facebook and Periscope were temporarily blocked on 27th January 2019, also reported by NetBlocks, coinciding with an online statement made by Juan Guaidó.

What happened during the protests?

Following the contested 2018 elections, the National Assembly of Venezuela stated that the results were invalid and announced Juan Guaidó as the acting president. President Maduro decided to hold his leadership, triggering the eruption of protests last Wednesday, 23rd January 2019. 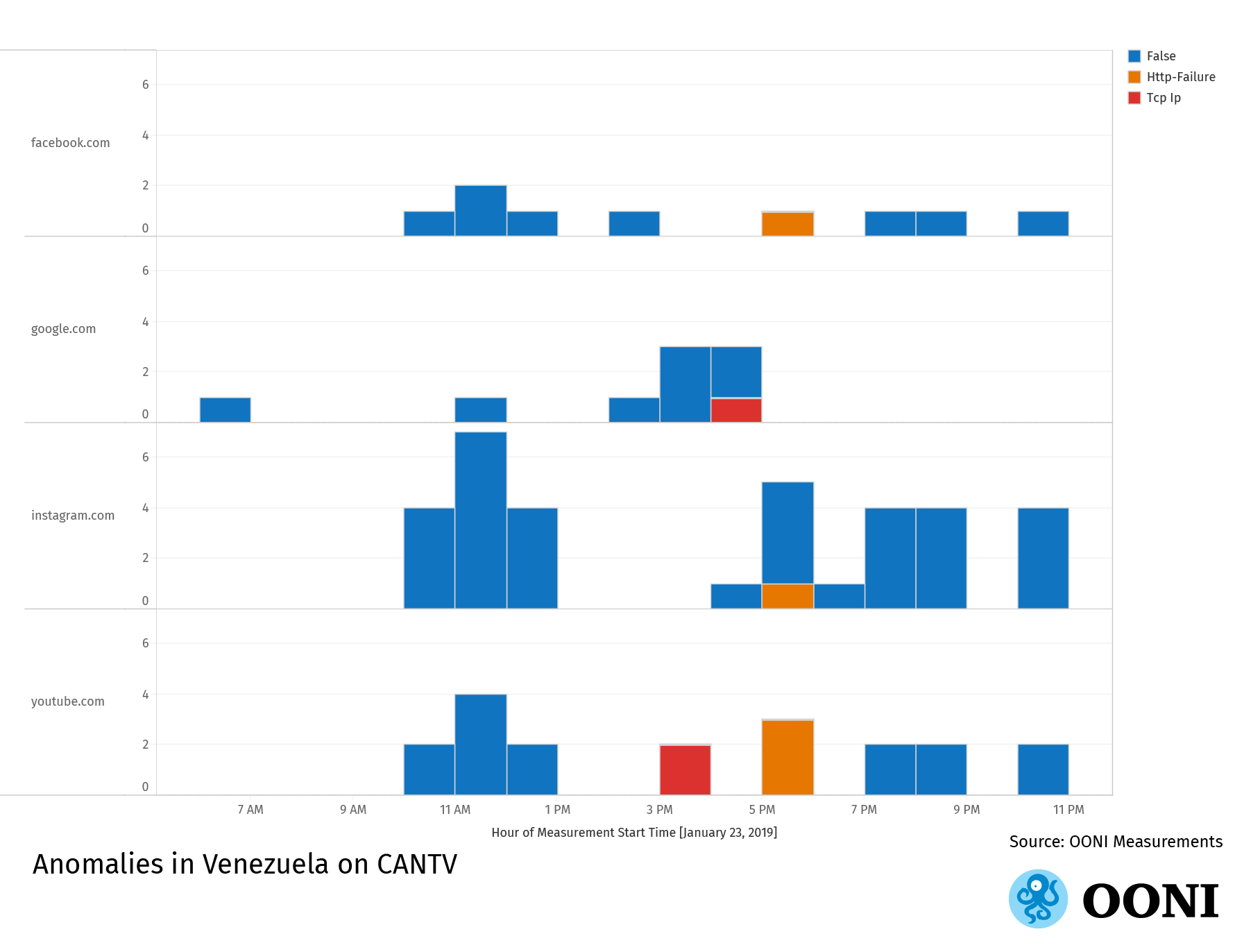 Access to youtube.com, facebook.com and instagram.com may have been interfered with at around 5pm UTC, though we don’t have enough measurements to confirm this.

Unlike the measurements showing the SNI filtering of Wikipedia, Twitter, Instagram and YouTube (discussed earlier), the (few) anomalous measurements testing Google services only presented TCP/IP anomalies, which may have occurred due to transient network failures.

Alternatively, the Google anomalies might have been triggered by the blocking of some Google IPs, particularly since the only anomalous measurements present TCP/IP anomalies. Analysis by OONI of this anomalies suggests no critical internet disruption appears to have occurred.

This is further corroborated by Google traffic data, illustrated below, which shows that traffic originating from Venezuela has been uninterrupted this past month. 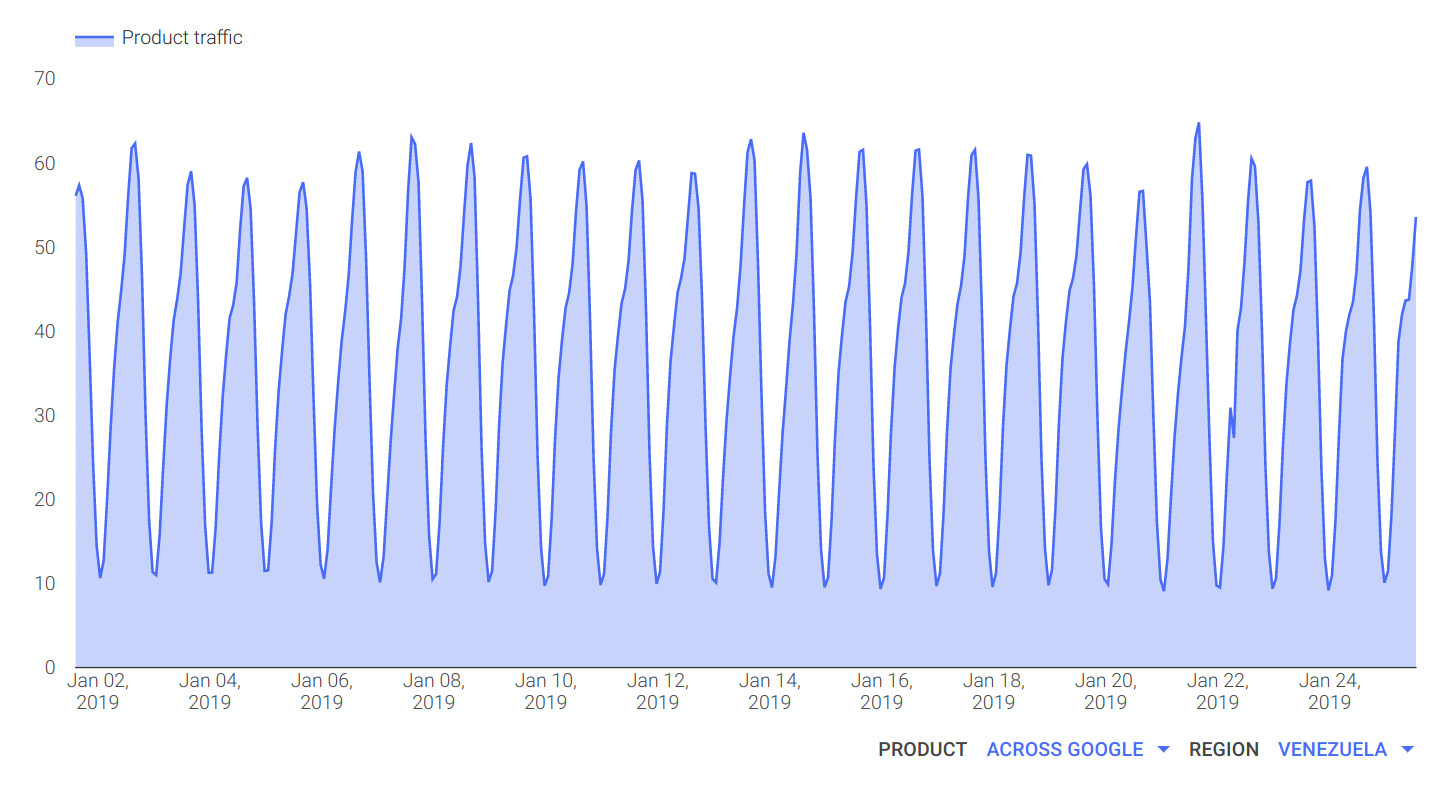 During the protests, IPYS Venezuela coordinated with a group of citizens across Venezuela to measure the speed and performance of networks (fixed and mobile) through the use of M-Lab tests. Between 12pm to 9pm (local time), they ran 39 tests across four ASNs (CANTV, Digitel, Inter, Movistar) in 11 states: Anzoátegui, Aragua, Bolívar, Carabobo, Capital District, Guárico, Miranda, Sucre, Táchira, Yaracuy and Zulia.

By looking at the median download speed taken from NDT measurements from July 2018 until January 2019, we can see that there is a slight decrease in throughput starting from the end of December 2018. 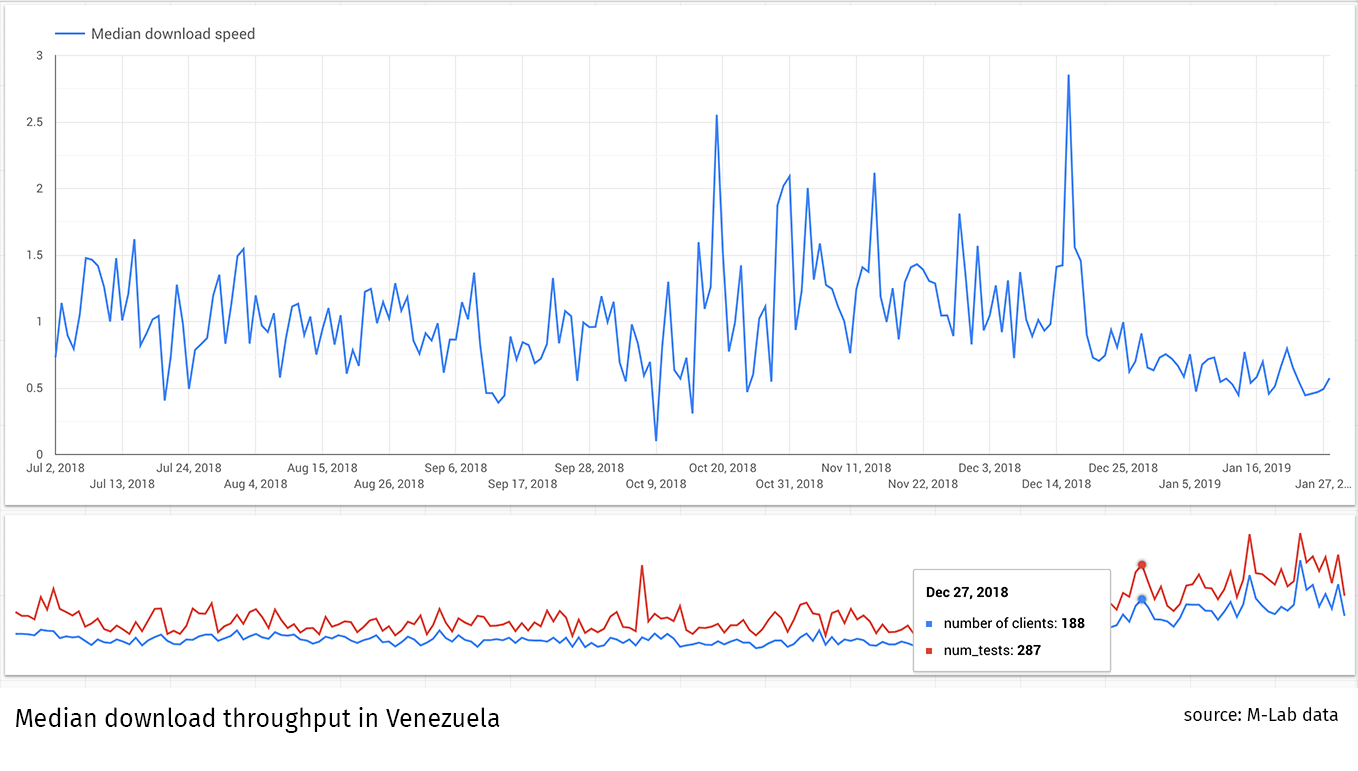 It remains unclear though if this decrease in throughput is due to networks being overloaded or due to throttling.

Locals reported that internet access was disrupted in several states between 23rd to 27th January 2019. IPYS Venezuela and Venezuela Inteligente received reports of connectivity issues in Portuguesa, Anzoátegui and Táchira on 23rd January 2019, and in parts of Trujillo and Bolivar on 26th January 2019.

During this period, offline forms of censorship were reported as well. According to IPYS Venezuela, the Chilean TV channel, Canal 24 horas, was censored on subscription TV services on 24th January 2019 after it broadcast the signal of the Colombian channel NTN24 (which has been censored in Venezuela since February 2014). The swearing-in of Juan Guaidó was not televised either.

This is the first time we are seeing fast-paced, tactical changes to censorship by Venezuelan ISPs. CANTV has started to rely on more advanced censorship techniques since mid 2018, complimenting DNS-based censorship. Manual testing conducted in Venezuela (correlated with OONI measurements) shows that CANTV is implementing SNI-based filtering as well.

This is not, however, the first time that we are observing internet censorship in the country. We previously reported on pervasive media censorship in Venezuela, as well as on the blocking of currency exchange websites and political sites.

The current political crisis has motivated the state ISP, CANTV, to block social media in a more tactical way, restricting the reach of specific public speeches that Venezuelans can only see online, on top of previously reported long-standing blocks (and all within the context of highly censored TV and radio).

Network measurements collected from Venezuela have shown (and continue to show) a strong correlation between internet censorship and political events. The situation remains tense and as political events unfold, the public can monitor censorship events through the use of OONI Probe and OONI data.

We thank all OONI Probe users in Venezuela who made this study possible.