Venezuela is experiencing even more online censorship as a group of military officials in Caracas recognize Juan Guaidó as Interim President during an uprising against Nicolas Maduro, in addition to saturated networks and chronically unreliable connections.

As of 11:30 am Venezuela Time, key social media and streaming platforms YouTube, Twitter, Periscope and Instagram continue to be blocked by the state-owned ISP CANTV which is by far the largest Internet Service Provider in the country. These blocks are in addition to longer standing internet blocks.

VE sin Filtro has documented the TCP-based block of YouTube from early hours.

Later in the day HTTPS blocks of Twitter, Periscope and Instagram were technically analized at 10am. This kind block uses SNI-filtering to identify the target site but is only partially effective.

In addition to social media and streaming platforms Venezuela censors many media and news sites, including local and international news websites as well as Venezuelan streaming news media that started in response to the lack of independent TV in Venezuela.

Other kinds of censorship:

From 7-9am local time some sites previously blocked via a technique called SNI-Filtering appeared not be blocked, later the same kind of SNI-filtering technique used against Twitter, Periscope and Instagram was clearly observed to those sites. It’s possible that the period of time those sites responded normally existed because of the network interference being less effective or because of a temporary lifting of the block, possibly as configurations changed.

Previous HTTPS blocks in 2019 would prevent the TLS handshake by dropping the initial packages of the exchange, in this case we see spurious packages affecting the TLS handshake. After 2:30pm VET these blocks to the implementation observed before 2014-04-29, in which TLS hadnshake fails beacuse of dropped packaged.

Changes in technical means of blocking will require further research looking into recorded data to identify the moment it changed and exact means of operation. Further

Update 2:30pm: The SNI-Filtering blocks returned to standard implementation observed before 2014-04-29, in which TLS hadnshake fails beacuse of dropped packaged. 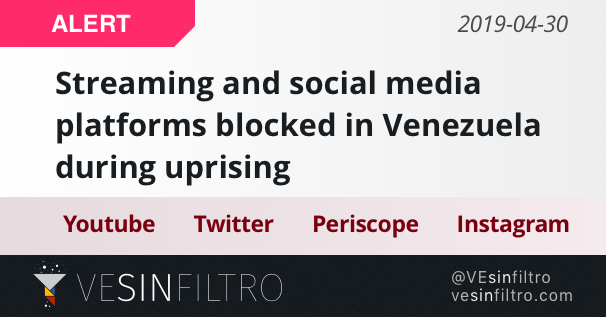