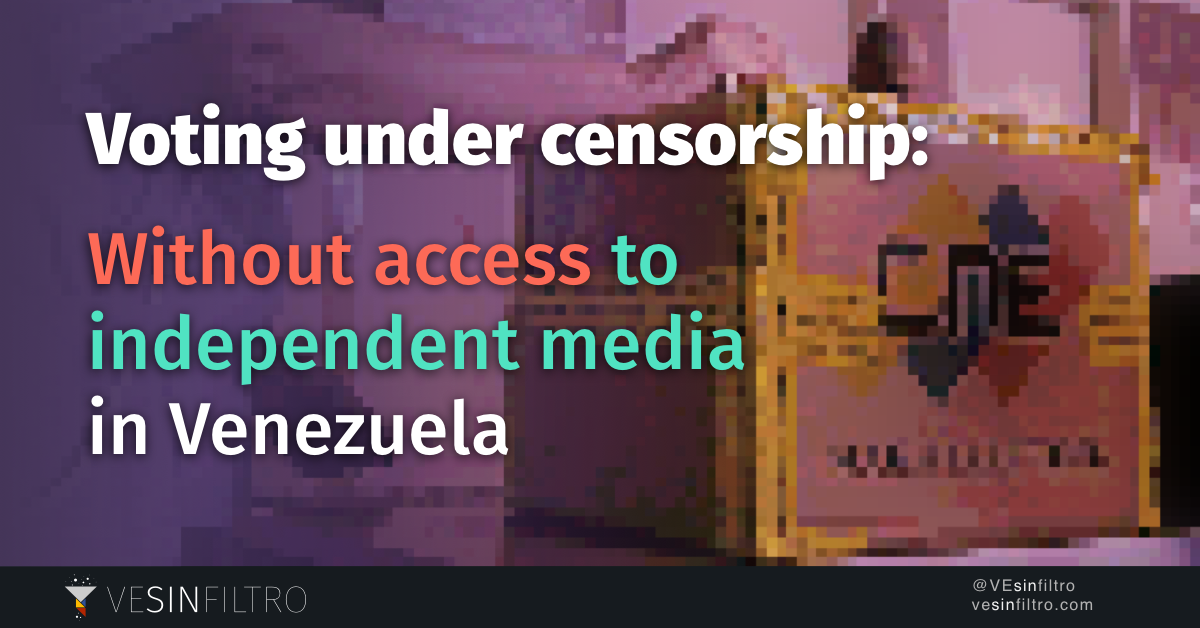 On November 21, elections for mayors and governors were held in Venezuela, and after an electoral campaign with the majority of the independent media censored, the event was characterized by high percentages of abstention and misinformation. According to the bulletins of the National Electoral Council, a participation of 42.26% was reached, thus evidencing that the majority of voters abstained from participating in this electoral process.

For more than a decade, electoral events in the country have been defined by uncertainty, a media ecosystem with unbalanced coverage, and the difficult access to information by voters, a situation that has worsened over time due to the increase of internet censorship in recent years.

Since the beginning of the analysis of internet censorship in 2014 by VE sin Filtro, the number of websites blocked by different internet providers (ISPs) has increased as well as the sophistication with which they are implemented, especially in CANTV, the main ISP in Venezuela and a state company since its nationalization in 2007.

During the election and the entire electoral campaign, the vast majority of internet blocks were directed against the media and other websites whose content is primarily news. The blocks also affect platforms used to disseminate multimedia content, portals with political content openly critical of the government, platforms that have been affiliated with programs promoted by the opposition, among other categories.

Notably, the blocks also limit access to censorship circumvention tools such as some VPN (virtual private network) services and disrupt the operation of the Tor network, both used to evade censorship and increase the privacy of connections. This has made the access to information even more difficult for internet users who wish to evade blockades to access news sources.

The information ecosystem in Venezuela is strongly restricted, especially in traditional media, leaving the internet as the freest space for publishing news related to politically sensitive issues, and for participating in public debate, despite limitations and risks. Venezuelans have suffered from intimidation to arrests and legal proceedings for the legitimate exercise of freedom of expression on the internet.

Internet access is not uniform in Venezuela, with very limited and difficult access in many regions and insufficient connection speeds for many important uses of the internet such as watching news reports via livestreams or sharing audiovisual content. All this is coupled with internet blocks, which are applied by the main providers, not only the state-owned CANTV. Additionally, the lack of investment, poor maintenance and economic crisis have resulted in unstable internet services, with frequent failures that leave users without residential service for months or years; added to the frequent failures of the electrical service, necessary for an internet connection.

The following table presents 56 blocked domains, belonging to a total of 49 websites of various relevant categories to be informed and participate in the political debate in the face of the elections:

List of blocked domains of selected categories during the election of November 21, 2021 and the electoral campaign.

*The blockade began shortly before the official start of the campaign, with the date of the elections already announced.

**The website is down, has not been updated or has been abandoned after blocking.

***Categorized as Culture by Citizen Lab 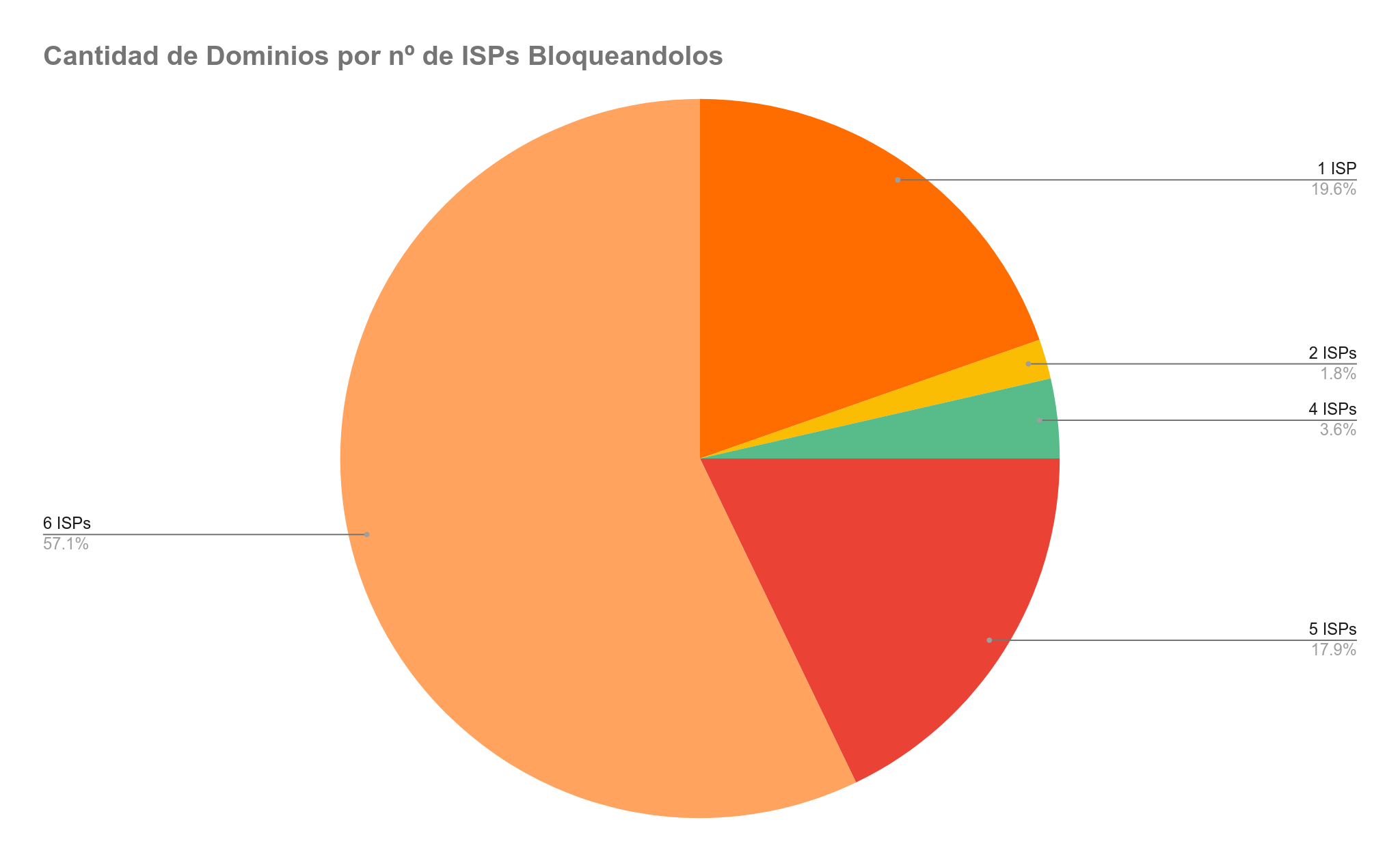 It can be seen how the vast majority of the listed domains are blocked in at least five of the six ISPs (75%) and more than half are blocked by all. The other significant scenario is the blocking by a single ISP (19.64%), the state company CANTV always censoring in these cases.

The list of blocked domains in Venezuela changes frequently, which is why from VE sin Filtro we measure all events related to internet censorship. For example, on 2021-09-06, the blocks were lifted on the web domains of the Insight Crime organization, https://www.insightcrime.org/ and https : //es.insightcrime.org/, which had been active since February of this year.

It should be noted that robertopatino.com, blocked in 2020, is the personal site of Roberto Patiño, who aspired to be a candidate for Mayor of the Libertador Municipality in Caracas in these elections, but declined his participation in favor of another candidate. It is currently published on an alternative domain, but robertopatino.com is still actively blocked.

A consequence of the censorship applied on the internet is the abandonment or the closure and disappearance of websites due to the loss of visits due to prolonged blocks. In some cases the block remains active even though the website has ceased to exist and content is no longer published on the internet, these cases are not reflected in this report.

During the electoral campaign 285 blocking events were identified, applied to the domains listed in this report. The highest number of events per registered domain was 7 in 16 different URLs, cases that show that there were ISPs that applied more than one type of blocking per domain, such as CANTV with https://hugocarvajal.com that features both DNS and HTTPS/HTTP blocking. Another 20 domains experienced 6 crash events, mostly representing an ISP crash event 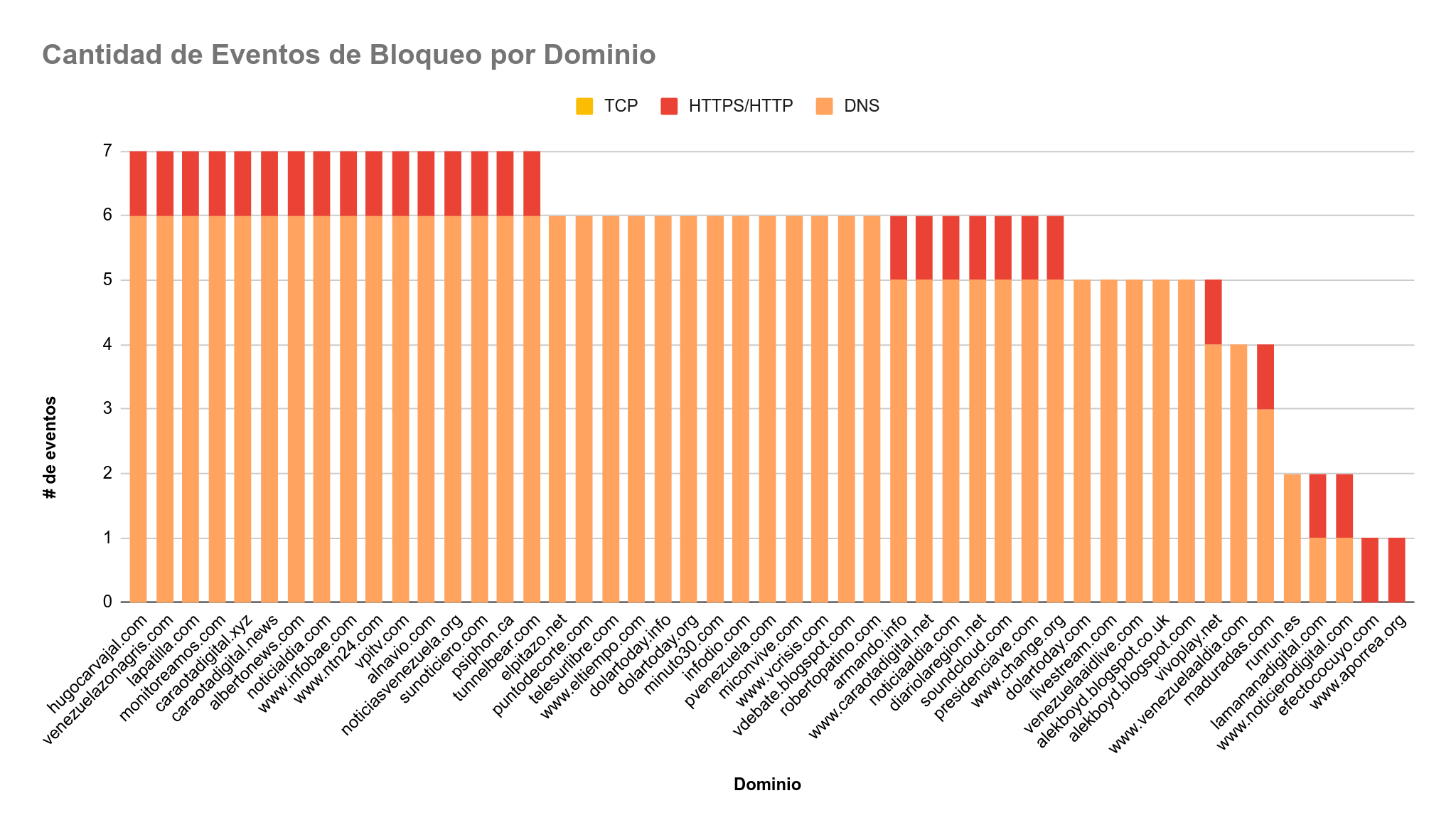 VPNs are anti-censorship tools that allow Internet users to evade blocks and access blocked content that they could not connect to. However, in Venezuela the main ISPs have blocked several VPN services on various occasions, with Psiphon and TunnelBear currently being affected. These two VPNs are the ones VE sin Filtro constantly recommends using to evade censorship.

In the case of Psiphon, the blocking only affects its main website, but the functionality of the application remains intact. The current blocking of TunnelBear does affect certain aspects of the operation of the app, making it impossible for an user to change the password of their TunnelBear account; dspite this, it is possible to use the VPN to evade blockades.

Censorship of circumvention tools is concerning, as a VPN is necessary to bypass the blocks in most of the cases presented in CANTV. In turn, VE sin Filtro has registered a partial blockade of the Tor network, which had previously been blocked in 2018.

Tor provides its users with anonymity, privacy, and a censorship circumvention tool, which is why it is used around the world by many journalists and activists. Since before and during the election period, CANTV has been implementing a block on Tor that is not completely effective.

In detail, the state telecommunications company is blocking a high percentage of authority directories necessary for the operation of Tor. To prevent Tor from being easily blocked, different “bridges” are provided for users to use the network, despite attempts at censorship. However, CANTV blocks connections to many of these bridges. While this hampers normal network use, so far it is still possible to establish connections through Tor. The exact percentages of these blocked servers are not included in this report so as not to facilitate censorship.

The most common type of blocking in Venezuela is the DNS blocking, of which 249 blocking events were identified, and is used mostly by private providers such as Movistar, Digitel, Inter, NetUno and Supercable. This type of blocking is the simplest to implement and the easiest for users to evade, it is only necessary to change the DNS server of the device in order to access the blocked content.

For its part, in recent years the state provider CANTV has implemented an HTTP/HTTPS blocking by SNI filtering and/ r Filtering by HTTP host, which is much more sophisticated. A total of 36 events of this type were reported, also taking into account the cases where the blocking was applied in only one protocol (HTTP or HTTPS). CANTV users must use a VPN in order to evade censorship, which can be complex for many people. Additionally, blocks to popular bypass tools like TunnelBear and Psiphon aggravate the situation. 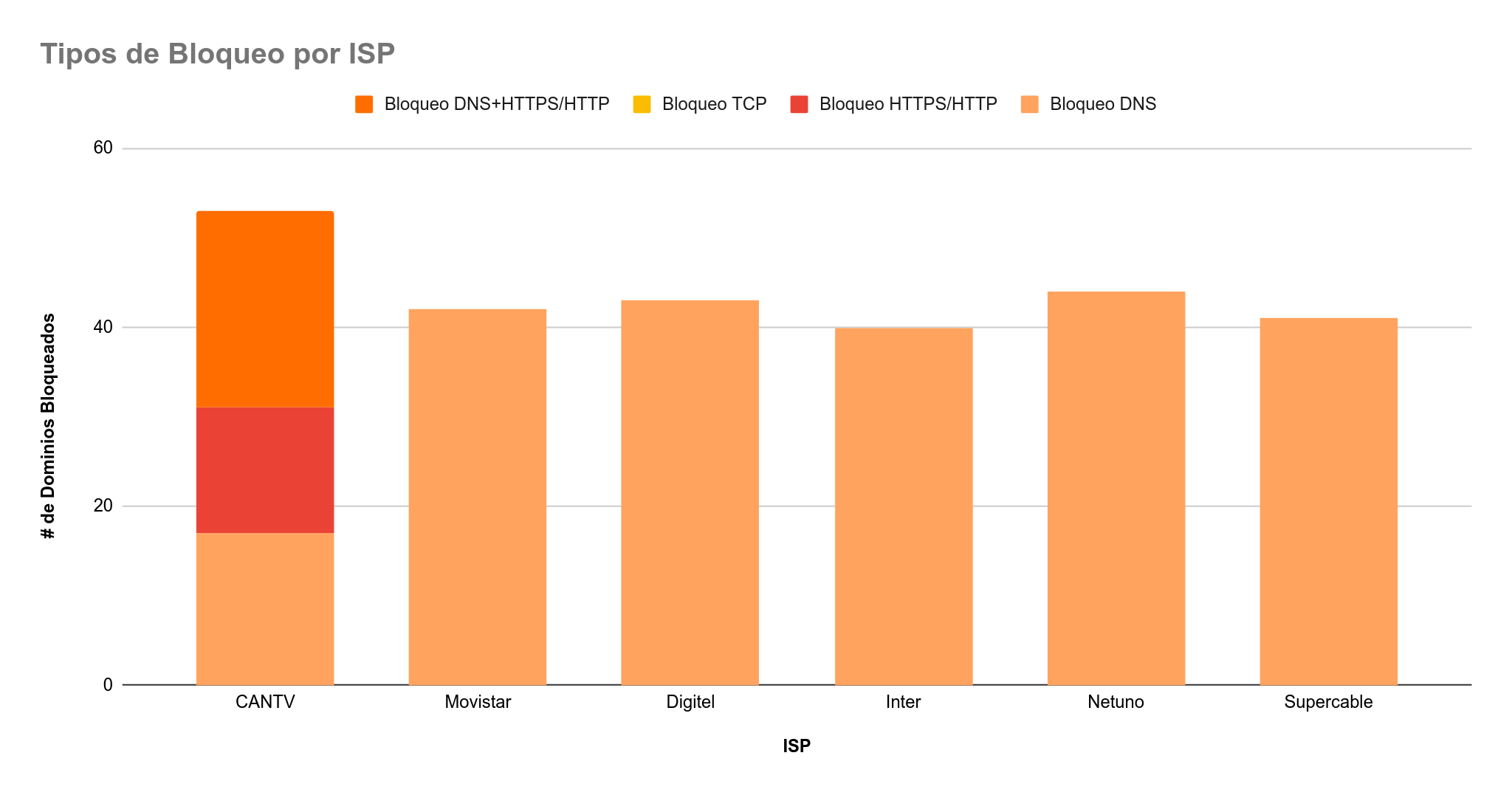 CANTV, the national internet service provider, is the one that had the highest number of blocks active during the 2021 elections, with a total of 53 censored domains, of which 22 of these domains experienced DNS and HTTPS/HTTP blocks simultaneously, therefore, the total sum of blocking events implemented by CANTV is 75 (26.32% of the total events).

While the other private providers, regulated by CONATEL, each presented between 40 and 44 blocking events, unlike CANTV, they only applied one type of blocking per domain, so the number of blocked events and domains is exactly the same.

It is evident that the most affected victims of the censorship applied during the 2021 regional and municipal elections were the independent media, which had 41 censored domains of the 56 analyzed in this report. This scenario promotes the scarcity of reports and news analysis on the electoral campaign and voting process, resulting in one of the causes of voter abstention.

It can be deduced that the objective of these blockades is to control the information that is disseminated at the national level, to prevent views opposed to the government and/or reports of illegal events carried out or financed by people belonging to the government from being known. For this reason, websites such as https://hugocarvajal.com and https://venezuelazonagris.com were recently blocked, when the execution of the electoral process had already been approved, these in turn being part of the 16 domains with the highest blocking events applied, with a total of 7 events per domain.

This research is based on the technical analysis of network measurements and screening tests generated from multiple points in the network of the different internet providers.

Determining a block by VE sin Filtro requires that the identified anomalies meet the following criteria:

Network measurements have been generated systematically and on demand before, during and after the electoral campaign and the election, using standardized tests developed by OONI (Open Observatory of Network Interference), proprietary tools and ad-hoc tests to identify in greater detail the locking mechanism and mislead or confirm cases.

Technical measure with the intention of preventing access to an information, service or server on the Internet, through interference with Internet traffic.

Block or set of related blocks of the same website, being able to group multiple blocking events.

Examples: vesinfiltro.com, lacnic.net More formally ‘domain name’, short text following an established format that is used as the name to identify websites or other services on the internet.

Time-consistent blocking instance, at the same internet provider, using a specific technique against an individual target. Example: If a domain is blocked by DNS and TCP at one ISP and by another by DNS, there are three events.

ISP, acronym of Internet Service Provider, is the company that provides Internet connection to its customers.

Collection of web pages related and common to an internet domain or subdomain on the World Wide Web within the internet. Also known as a web portal and sometimes used interchangeably with a web page in casual language.

Technology that allows you to see and hear content that is transmitted from the internet or another network without having to previously download the data to the device from which the file is viewed and listened to.

VPN, acronym for Virtual Private Network, is a tool that allows you to connect to a local network in another location safely through the internet. It is used to evade censorship and improve user privacy since it prevents the user’s internet provider from knowing what they are doing on the internet, they can only observe the use of this secure connection.

Tor (The Onion Router) is a system that allows browsing, increasing user privacy and eagerly evading internet blocks. Tor routes communication with pages between multiple nodes to obfuscate their origin, uses layered encryption so that the participating nodes do not know the content or identity.

VE sin Filtro is a program of the organization Venezuela Inteligente that since 2014 analyzes and documents with technical criteria internet censorship and other threats against the exercise of human rights on the internet.