In recent days VE sin Filtro has been able to document a significant increase in internet blockages against media outlets, in another attack to freedom of information and the exercise of human rights in the digital environment. The new blocks affect La Patilla and Caraota Digital, Alberto News, which were already blocked.

On May 29th, the main internet providers started blocking access to lapatilla.com, the most visited news web portal in Venezuela. This blockage of lapatilla.com began on 2021-05-29 in Digitel, Movistar, Inter and Supercable, while NetUno blocked it on 2021-06-01. The state-owned provider CANTV kept the main domain of La Patilla blocked for months, as they have done intermittently during the last years. At the same time, connections to La Patilla’s alternative domains - used instead of lapatilla.com - have also been blocked at CANTV.

We have also observed the blockage of at least two alternative domains of the news portal Caraota Digital used to evade censorship: caraotadigital.news and caraotadigital.xyz. Access to Caraota Digital from its original domain caraotadigital.com had already been blocked on 2020-10-10. These new blocks have been applied by all private providers for the beginning of June, but we do not have data of the exact moment of their beginning.

These events are added to the long list of blockages against the press in Venezuela, another recent one was the one of [TeleSur Libre on May 25, which was created as an initiative of Juan Guaidó’s administration in opposition to TeleSur, the regional media under the control of Nicolás Maduro’s government.

In Venezuela, not only media outlets not affiliated with the government of Nicolás Maduro have been blocked. In recent years the Venezuelan government have also blocked multimedia, streaming and social media platforms in an effort to limit access to news.

Soundcloud, the main audio hosting platform on the internet, was also recently blocked by private ISPs this May 9. The platform was already blocked at CANTV, having its access intermittently restricted since 2019. Soundcloud is used by news outlets as an alternative to the extensive blocking of websites. The blockage of Soundcloud in private providers affects the distribution of news in audio capsules via internet such as the reports of Servicio de Información Pública, Notiaudios of El Pitazo, the distribution of some podcasts, among others. 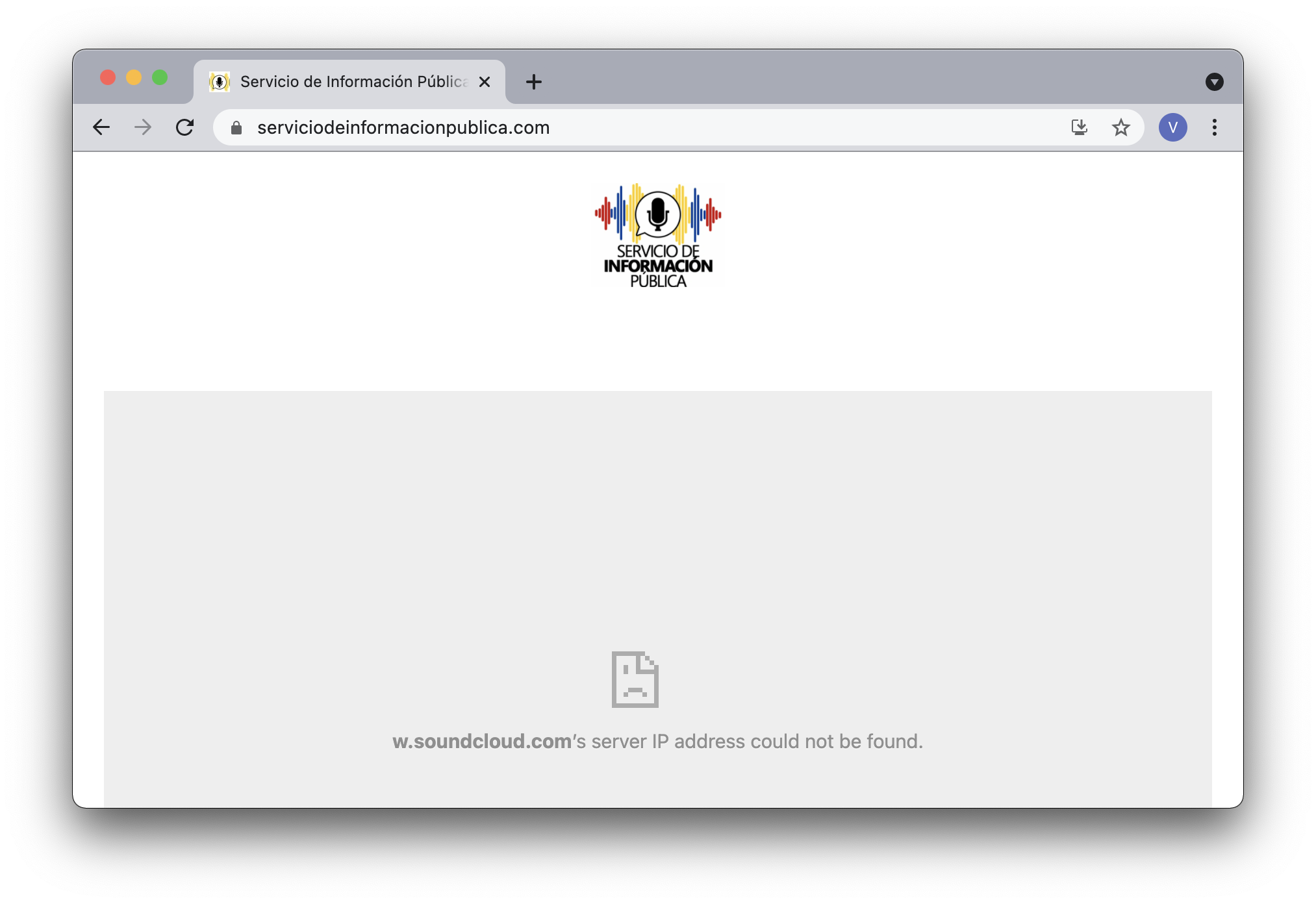 VE sin Filtro has also documented numerous tactical blockades - at precise times and of short duration - against Youtube, Twitter, Instagram and other platforms to silence breaking news and live broadcasting.

🛑 Blocked @YouTube in #CANTV during forum “Transition in #Venezuela is Possible” with the participation of Juan Guaidó. This is another tactical block, which seeks to silence a specific statement, news or event while it is broadcast on high traffic platforms. #internetVE pic.twitter.com/PeGYMUqdmc VE sin Filtro (@vesinfiltro) June 11, 2020

Restricting access to news is the main objective of digital censorship in Venezuela, especially during times of major political crisis, and it affects both national and international media that cover what is happening in the country. It is a serious violation of human rights that access to sources of information and the work of journalists is restricted in such a way.

This could be documented using network measurements generated and analyzed by VE Sin Filtro that serve as evidence of these interferences to the exercise of human rights in Venezuela.

Note: Some minor details were intentionally omitted from this alert to preserve details of the censorship circumvention schemes applied by the affected websites and/or investigation techniques.

We recommend the use of reliable internet blocking circumvention tools by users in Venezuela, such as a secure and trusted VPN, already installed and configured on all your devices.

Regardless of the blocking to their main websites, both Psiphon and TunnelBear are still available for installation from the iOS and Android app stores, and also from the following alternative links.

These are our recommendations to avoid #blockages on #internetVE: Even though @PsiphonEsp and @theTunnelBear page are blocked on #CANTV, these are still our recommended VPNs. More info in this thread: pic.twitter.com/SFmRM00olQ -VE sin Filtro (@vesinfiltro) March 31, 2021