The state-owned ISP in venezuela has blocked the website of Acceso a la justicia, a human rights NGO specialized in monitoring the administration of justice and the rule of law in Venezuela.

This block, which began this April 8 2021, prevents customers of CANTV (Venezuela’s main Internet provider and a state-owned company) from accessing to accesoalajusticia.org. CANTV is the Internet Service Provider (ISP) in Venezuela that blocks the most websites, having also collaborated in massive phishing attacks targeting opponents of Nicolas Maduro’s government.

This HTTP/HTTPS blocking implemented by CANTV requires the use of a VPN to bypass the censorship, as other common techniques would be ineffective. This is not the first attempt to silence Acceso a la Justicia’s website. On April 2020 their site was taken down after their hosting service provider received false and malicious DMCA complaints made with the intention of making them loose their web hosting and taking down their site. However these allegations were eventually discredited after pressuring the hosting provider with the help of VE Sin Filtro.

This block is another serious attack against human rights in Venezuela. It limits the right to freedom of speech and information, the freedom of association in a context of extensive censorship of the press online and offline, as well as threats and persecution to civil society organizations. Freedom House in its 2020 Freedom On The Net report classifies Venezuela’s internet as “not free”.

Despite the increasing rise of censorship and cyber attacks since 2019, accentuated during the COVID-19 pandemic, the government of Nicolás Maduro has announced its plans to legislate the regulation of social media. Also, alongside the resurgence of a dangerous Cyberspace Law that was leaked in 2019, both could give legal sustenance to the destruction of online freedoms for Venezuelans.

This HTTP and HTTPS block is classified as an application-layer block, requiring deep packet inspection to selectively block communication with the server when the blocked web site is the one being requested. This block was measured automatically for the first time in the evening hours of 2021-04-08, analyzed and verified by VE Sin Filtro. 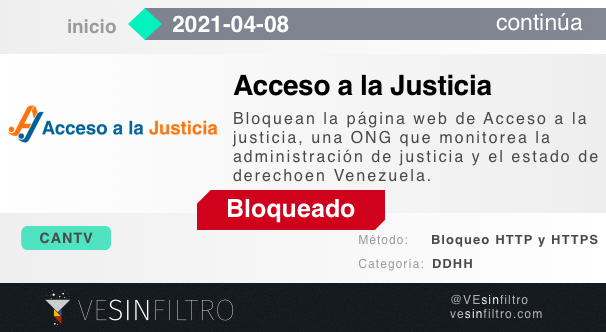 We recommend internet users in Venezuela to install and configure reliable and trustworthy circumvention tools in their devices. The main websites of our most recommended tools are blocked in the country, however they can still be downloaded.

Regardless of the block to their main websites, both Psiphon and TunnelBear are still available from the iOS and Android app stores, but also from the following alternative links.

You can follow the instructions in this video to install and use Psiphon.